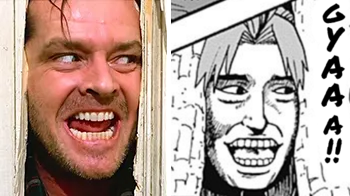 A common trope in tension-inducing scenes is the classic Axe Before Entering, where a character breaks down a door with a weapon, usually an axe, in order to get to the victim cowering behind. Then came its Trope Codifier, The Shining, known for one of its most iconic scenes where a crazed Jack Torrance, played by Jack Nicholson, hacks apart the bathroom door with an axe, behind which his wife hides.

The Shining came out in 1980, but the trope's roots are Older Than They Think. The scene itself is a Shout-Out to one from the 1921 silent film The Phantom Carriage, where the main character does the same to get at his family, while Jack's catchphrase (which wasn't even in the script) is actually one to Ed McMahon, the announcer of television Long Runner The Tonight Show who would introduce host Johnny Carson with a very drawn-out "Heeeeeeeeere's Johnny!" since the very first episode in 1962. While the catchphrase was very famous in television history at the time, it wasn't until The Shining that the public conscience forever associated it with the Ax-Crazy Jack Torrance, followed by many future works referencing or spoofing his famous scene to the point of becoming a Stock Parody in its own right. The fact that Carson stepped down from The Tonight Show in 1992 also helped, as it ensured that new generations would have no idea what "heeeeeere's Johnny!" was meant to referencenote to be fair, Stanley Kubrick didn't get the joke either— he moved to the UK in 1960, a full two years before Carson became host of The Tonight Show, and Nicholson had to both explain the reference and convince the notorious perfectionist director not to use a different take.

Most homages consist of a character reenacting the scene by breaking down a door, wall, or some other barrier, or/after which they peek from behind the door or hole, and say Jack Torrance's iconic line or some variation of "Here's <Proper Noun> —y/ie!", typically referring to themself in the third person, presumably under the mistaken belief Torrance was doing the same, and usually with a Slasher Smile.

Compare You Can't Handle The Parody for another Stock Parody based on one of Jack Nicholson's roles.