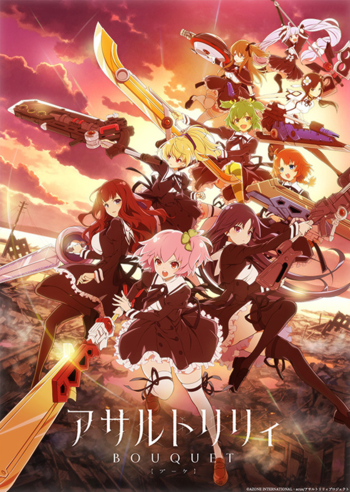 In a near future, humanity is threatened by the existence of monsters they call "Huge" (ヒュージ). To anticipate this, the whole world unites against Huge and succeeds in developing a decisive weapon called "Charm" (チャーム) that brings together the power of science and magi. Since Charm shows high synchronization to teenage girls, these girls are called "Lily" and are regarded as heroes. To train them, Lily training institution called "Garden" was established all over the world to counter Huge, and became a "sanctuary" to protect and guide people.

An anime television series titled Assault Lily: Bouquet (which is an adaptation of a mixed-media toyline of dolls) was announced on October 13, 2019. The series is produced by Studio Shaft and directed by Shōji Saeki and chief directed by Hajime Ōtani, with Mieko Hosoi designing the characters. Akito Matsuda is composing the series' music. Raise A Suilen performs the series' opening theme song "Sacred world", while Hitotsuyanagi-tai (a unit consists of the main characters) performed the series' ending theme song "Edel Lilie". The series was originally scheduled for a July 2020 debut, but due to the COVID-19 Pandemic, the series premiered on October 2, 2020, on TBS and BS-TBS. Funimation licensed the series and is streaming it on its website in North America and the British Isles.