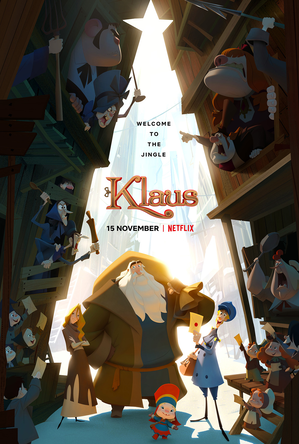 Klaus is a 2019 animated Christmas film directed by Sergio Pablos (best known for creating the Despicable Me franchise, and as the supervising animator of Dr. Delbert Doppler and Tantor) which serves as an origin story for Santa Claus. It's the first feature film to be produced by Pablos's homegrown studio, Sergio Pablos Animationnote Not to be confused with the other animation studio who's initials are SPA. in Madrid and stars the voices of Jason Schwartzman, J. K. Simmons, Rashida Jones, Joan Cusack, Will Sasso and Norm Macdonald.

Selfish, lazy Jesper Johanssen (Schwartzman) is the worst student at the postman's academy, constantly sabotaging himself and trying as little as possible so he can keep relaxing on his father's dime. His father, who also happens to be the postmaster general and the dean of the academy, eventually gives Jesper an ultimatum: deliver six thousand letters in a year or be cut off from his family's finances forever. He assigns Jesper to the small, dreary North Pole town of Smeerensburg, which is populated near-entirely by two families who have been feuding for as long as either can remember and, therefore, have little interest in sending each other letters. On his failed postal route, Jesper meets Klaus (Simmons), a reclusive woodsman with a knack for building wooden toys and the two quickly learn that they'll not only be able to help one another out, but bring some much-needed happiness back to a town that desperately needs it.

The film is notable for its groundbreaking visual style, which applies realistic shading and volumetric lighting to "paperless" hand-drawn animation, giving 2D drawings a distinctly 3-dimensional look (sort of an inversion of Paperman's technique). According to Pablos, he believed that 2D feature animation had gone out of style largely because it hadn't progressed much since digital ink-and-paint, which could only make characters look like stickers pasted onto backgrounds and paled in comparison to CGI. Inversely, he believed CGI was becoming old hat, as there was no further ground to break once it had achieved the utmost photorealism. This new technique was his studio's way of not only integrating the 2D characters into 3D environments better, but also keeping hand-drawn animation alive while allowing it to progress technologically into the 21st century.

A "proof of concept" teaser

was released in 2015, with the finished film premiering on Netflix four years later on November 15th, 2019 after a limited theatrical release a week earlier.

Example of:
Watch Where You're Going!