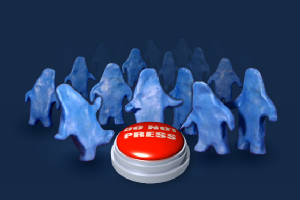 This won't end well...
What did the robot... say to the centipede?
Advertisement:

is a series of stop-motion claymation videos by Robert Benfer (AKA Knox). They showcase a community of Lethally Stupid clay people (usually blue, but other colors aren't uncommon) and their antics atop the table that is their world. It's generally regarded as the codifier of internet claymation comedy, and most subsequent similar works tend to follow the same pattern.

except for the movie, Klay World: Off The Table.

It's funny, 'cause the robot ain't got no arms.
Feedback

The Robot and the Centipede

It's funny because the robot ain't have no arms.

The Robot and the Centipede

It's funny because the robot ain't have no arms.