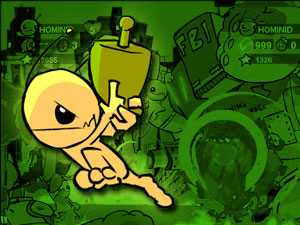 You could poke him with a pillow and kill him.
Advertisement:

Alien Hominid is a 2-D Side-scrolling Action Game that originated on Newgrounds. The flash version seen on the site was programmed by Tom Fulp and designed by Dan Paladin, who would later create the indie game development team The Behemoth. It was later made into a multi-platform game in 2004 through 0~3 Entertainment and is well known among gamers and the Newgrounds community.

This game stars a little yellow alien who has crash-landed on Earth, and tries to escape the clutches of the FBI, Communist Russians and Area 51 agents to get home. Fat Kids help him along the way, but the story doesn't get much more complex than that. The gameplay is reminiscent of games like Metal Slug, with the player being a One-Hit-Point Wonder that runs through wave upon wave of enemies to reach the bosses at the end of each level. It also contains a few mini-games. Overall, the game has been very well received by critics.

On January 30, 2020, The Behemoth released the trailer for a sequel: Alien Hominid: Invasion

. A demo would be made available at the PAX East and EGX Rezzed gaming conventions.