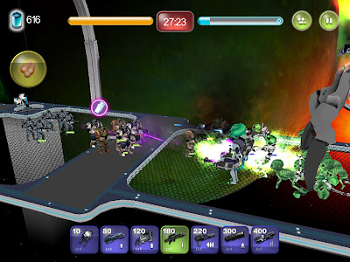 There's a hallway, and there are aliens in it.

Alien Hallway is a strategy game developed by Sigma Team (the makers of the Alien Shooter games). Your task is to command a squad of Space Marines to fight to the other end of the hallway—which is, of course, filled with aliens—and destroy the aliens' base before they can do the same to you.