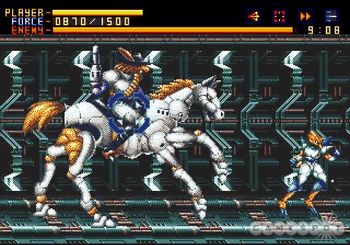 Merco is under attack from Brad Fang riding Bravestarr's horse. This is a Japanese game, isn't it?
VISUALSHOCK! SPEEDSHOCK! SOUNDSHOCK!
NOW IS TIME TO THE 68000 HEART ON FIRE!
Japanese title screen, immediately setting the game's tone
Advertisement:

Alien Soldier is a 1995 Run-and-Gun game by Treasure for the Sega Genesis, serving as a Spiritual Successor to Gunstar Heroes. While it shares some similarities with other run-and-guns, the focus here, aside from depending on your reaction time and unique capabilities, involves lots and lots of boss fights. You play as Epsilon-2, a cybernetic birdman who fights against the rogue organization Scarlet, traveling throughout the galaxy and leaving large amounts of carnage in your wake.

The plot, if it even matters, begins when a group of researchers called Scarlet from the planet Sierra go too far with genetic engineering. Scarlet creates powerful mutant lifeforms for the purposes of space travel and colonization. The mutants rebel against their creators, form a terrorist organization of the same name, and go on to menace their homeworld. Members of the new Scarlet are able to infiltrate other beings as parasites, then modify and/or take over the bodies of their hosts. After a while, Epsilon-Eagle, the leader of Scarlet, was ambushed by a team of Sierrans with superpowers, and thrown into the space-time continuum. The new leader of Scarlet, Xi-Tiger, was hated by his own men for being too ruthless compared to Epsilon, and as such he wanted to destroy Epsilon once and for all even after his banishment. Xi-Tiger attacked a Sierran research facility where he sensed Epsilon in the body of a boy named Fou. He took Fou's best friend Kaede hostage in an attempt to force Epsilon to come out, causing Fou to transform from a boy into a cybernetic birdman called Epsilon-2. However, Fou's good human side began to overcome Epsilon's evilness and made him want to fight for good. Xi-Tiger killed Kaede and ran away, triggering Fou and Epsilon's combined rage, thus, they begin chasing after him. While this is happening, Epsilon-Eagle's evil side lives on in another body - Epsilon-1, and flies off elsewhere.

This is where the game begins proper, and the plot becomes even more outlandish as you play on. The first surprise may come when Epsilon-2 continues his conquest even after killing Xi-Tiger. From there, he will proceed to face familiar and unexpected foes, witness the death of his homeworld, and travel back in time to save it. The game culminates in a face-off against a gigantic cyborg lion - Z-Leo, whose significance to the plot is unknown.

Of course, none of that actually matters. What does matter is lots of explosions, sick Genesis music, a badass and overloaded main character and an impressive amount of bosses - more than twenty of them, in fact!

Alien Soldier is a fairly tough game to to pick up, mostly owing to the difficulty of getting used to the abilities at your disposal. These includes multiple weapons, mobility, defensive options and even an ultimate attack. For your sake, they will be explained below.

Epsilon-2 carries four weapons, chosen from a menu at the start of the game, with a total of six options. Ammo increase or a weapon swap is granted by the weapon powerups. The weapons are:

Finally, there's Epsilon-2's ultimate attack. While he has full health, executing a Zero Teleport will turn it into Phoenix Force - a flaming version of the move which will obliterate all regular enemies Epsilon-2 dashes through, and can be equally as effective on bosses if you know when and where to use it. This move drains some of Epsilon-2's life, thus preventing players from spamming it and thus incentivizing the usage of Counter Force to recover and re-use it. Epsilon-2 likes using this in cutscenes.

Mastering this diverse arsenal is the first step towards beating the game.

For those who are interested in learning more about Alien Soldier's lore and gameplay mechanics, there is a translated version of the Japanese manual of Alien Soldier to refer to right here!

In 2022, the game was added to the Nintendo Switch Online Expansion Pack's Sega Genesis library.

Compare Cuphead, another run-and-gun game with a heavy emphasis on challenging boss fights.