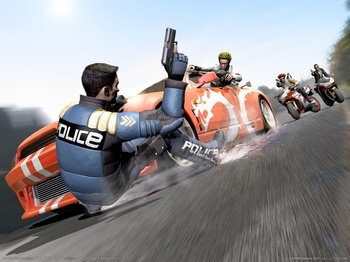 In video games, a High Speed Battle typically results when the player and an enemy have jumped into vehicles and continue to duke it out, in a manner of speaking. Two possible iterations exist:

Not entirely restricted to action games, as many RPGs will have either sequences or mini-games based around a High Speed Battle. Also frequently seen in movies. Advancing Boss of Doom, Chasing Your Tail, and Cat-and-Mouse Boss are slower-paced variations. Also, many of the examples simply involve characters who can run really, really, really fast.

His Boss Fight consists of Pit and the Chariot Master chasing each other on separate chariots.

His Boss Fight consists of Pit and the Chariot Master chasing each other on separate chariots.