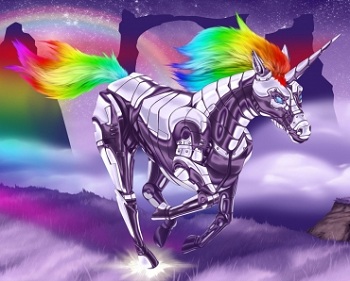 Unicorns count too.
"A horse, or something built around the same general plan, was coming down the street at a hard gallop. Its hooves did not make the pocking noise of iron horseshoes. Bud realized it was a chevaline — a four-legged robot thingy."
— The Diamond Age by Neal Stephenson
Advertisement:

A Horse of a Different Color indeed — and an entirely different nature. Combining the coolness of a horse with the tireless reliability of a machine, the Mechanical Horse is, at its most basic level, a motorbike with legs. (If it doesn't have legs, see My Horse Is a Motorbike.) The Mechanical Horse will usually be a robot, but some Steampunk universes feature clockwork horses. This is a mechanised version of the Diligent Draft Animal when the horse is used for carrying loads.

The idea is not quite as ludicrous as it sounds. Biological horses can walk on vastly more kinds of terrain than a wheeled vehicle (not to mention they are perfectly amphibious), and it would be quite useful if there were a machine that could do the same thing. But engineers find it very challenging to overcome all of the problems with moving around on legs, on any uneven surface, without falling down. As an odd example, the US military once funded experimentation into a "walking truck", a horse-like machine designed as an all-terrain mount and transport. (It looks really weird.)

Not to be confused with horses treated like machines, the identically-named vintage vehicle,

or a type of kiddie ride. A really big mechanical horse with some of the animal traits taken away and some weapons added is basically a Spider Tank.