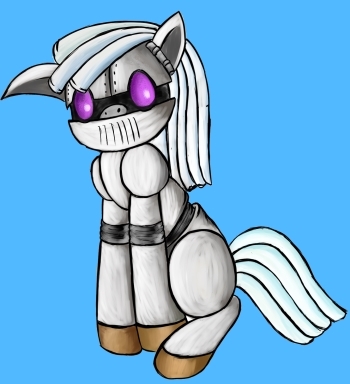 She'll befriend you. That's what she does. That's all she does!
Advertisement:

Can a machine make friends? When Twilight Sparkle finds the first independently functioning automaton in Equestrian history, she decides to find out.

This My Little Pony: Friendship Is Magic Fanfic by The Hat Man

centers around a mysterious robot pony who gets struck by lightning and loses her original programming. Twilight, being the student she is, takes the robot, whom she names "Turing Test," under her wing. The story owes a lot to the likes of Isaac Asimov and Star Trek: The Next Generation in particular, among other works depicting fictional robots. It is mainly a slice-of-life comedy about the titular character's development and growth through The Power of Friendship, though it also has an ongoing story about who Turing's creators are and what they want.