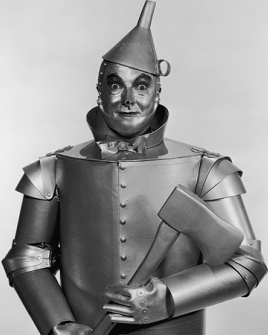 Look at this cold, emotionless bastard.
"I mean, being a robot's great, but we don't have emotions, and sometimes that makes me very sad."
— Bender, Futurama
Advertisement:

He's incapable of emotion, or so he says. Really he's as compassionate and sensitive as the next guy, or more so. In fact he's probably the nicest guy in the series. Ironic, isn't it?

This often leads to a paradoxical quest to Become a Real Boy, or at least learn emotions. If they didn't have emotions to begin with, how can they desperately feel the need to have them?

It also seems that certain emotions count more than others. Warm fuzzy happiness counts more than anger, frustration or sadness. So someone can be an aggressive wangster but since they can't enjoy the smell of a flower, it's stated they can't feel emotions. The Stoic Woobie hinges on this trope; their character lies in seeming outwardly unemotional, yet still feeling emotions deep down, thus maintaining their woobie status. Perhaps if they were more honest and said they want to be happy instead of just having emotions in general, they'd be more successful.

Refers to the character in The Wonderful Wizard of Oz. Who, in fact, was prone to Tender Tears, to give the game away entirely. Other unconscious tics, such as destroying whatever is in the character's hands while denying anger, can betray other Tin Men.

Truth in Television: What's usually being depicted here is someone who is out of touch with their emotions, experiencing them without being aware of them. This is not so uncommon in real life. Reasons can include machismo, denial, some mental illnesses (e.g., depression), or certain cognitive abnormalities (e.g., the autistic spectrum). There's also a personality trait known as alexithymia,

which is defined by the mind having great difficulty in identifying feelings, distinguishing between feelings and the bodily sensations of emotional arousal, and in describing feelings to other people. Lastly, anger is heavily influenced by a different part of the brain from other emotions, which can explain why a person can be angry, but not know why they're angry, or lash out in a particular way and unaware that anger is fueling their actions.

The dark flipside of the trope is especially common in Science Fiction or Fantasy, where whole races may be introduced as "logical" and beyond base emotions; and then turns out to be arrogant, harsh, hateful, merciless or borderline unstable, as if they've lost their positive emotions but kept all the bad ones. Apparently, many authors confuse being emotionless with being a Jerkass who derides those emotions considered "weak", like mercy, empathy, altruism, love, humility, compassion and the ability to see someone else's point of view. Or basic politeness. So instead of an indifferent race that cannot be bothered over differences and levels of evolution, what we get is a race that is willing to exterminate anyone with extreme prejudice because they feel arrogance and contempt, but neither shame nor horror.

Compare Frozen Face, where he cannot show the emotions in his face even if he feels them on the inside. Compare and contrast with The Stoic and the Emotionless Girl, who unlike the Tin Man do not emote, regardless of whether they have feelings or not. Not to be confused with the Syfy miniseries.