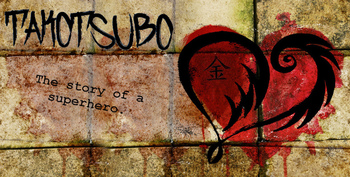 Despite his own beliefs, he is in fact a hero.
"My name is Cord Cai. My fiancé got shot for his car, and nobody gave a fuck except me."
— Cord Cai
Advertisement:

Takotsubo: The story of a superhero

is a troper work by Sharysa on HitRECord. The main story is a script, but she's also written three companion pieces in prose: The Bridge-Building stories and Gunsmoke.

Takotsubo is the story of Cord Cai, a young Chinese-American who lives in Oakland, California. After his fiancé Roland Fujii is shot in a botched carjacking by Harry Lamont, Cord shoots Lamont in revenge and then takes on the gangster alter-ego of "the Tin Man," leading East 13. It is a massive Deconstruction of the superhero genre's lack of racial diversity, as well as Cord's specific stereotype of the Asian-American gangster.