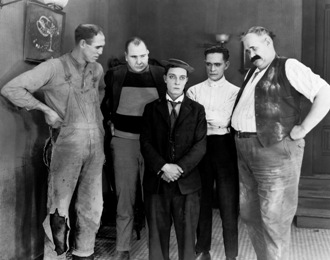 "He won't last a week in this family."
"Papa! Shut your eyes and see what I married!"
— Kate, introducing her husband

A series of misunderstandings involving a taffy pull, a postman, a broken window, and a monolingual Polish judge leaves Buster Keaton married to Kate, a large, irate Irishwoman whose family thinks he's rich.

"My Wife's Relations" can be seen in its entirety at Youtube.

"My Wife's Relations" provides examples of: