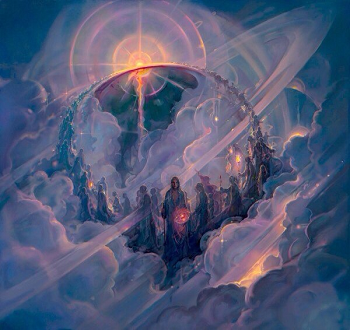 Mythopoeia (from the Greek words that mean "myth-making") is a narrative genre in modern literature and film where a fictional mythology is created by the author or screenwriter. The word mythopoeia and description was coined and developed by J. R. R. Tolkien in the 1930s. The authors in this genre integrate traditional mythological themes and archetypes into fiction. Mythopoeia is also the act of making (creating) such mythologies. Notable mythopoeic authors aside from Tolkien include C. S. Lewis, Robert W. Chambers, H. P. Lovecraft, George MacDonald, and Lord Dunsany, among others. While many literary works carry mythic themes, only a few approach the dense self-referentiality and purpose of mythopoeia. It is invented mythology that, rather than arising out of centuries of oral tradition, is penned over a short period of time by a single author or small group of collaborators.

As opposed to fantasy worlds or fictional universe aimed at the evocation of detailed worlds with well-ordered histories, geographies, and laws of nature, mythopoeia aims at imitating and including real-world mythology, specifically created to bring mythology to modern readers, and/or to add credibility and literary depth to fictional worlds in fantasy or science fiction books and movies.

Mythopoeia can be created entirely by an individual, like the world of Middle-earth, or can be formed as a result of an amalgam of writings, like the Cthulhu Mythos. An Expanded Universe can result in the creation of one of these, particularly for Long-Runners.