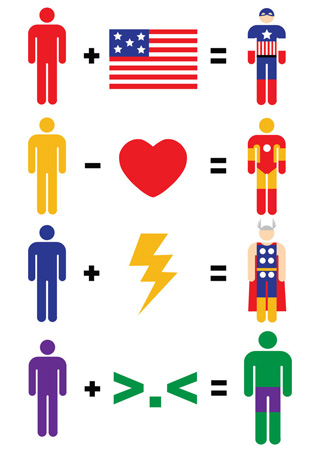 The Avengers as explained by Matt Cowan.

I got bitten by a radioactive bug
I tried an experimental drug
I went for a stroll on a gamma testing range
I found an enchanted Uru cane
I made a serum that made me small
I modified the serum so it would make me tall
I got a radioactive isotope in my eyes
A dying alien helped me accessorize
— Ookla the Mok, "Super Powers"
Advertisement:

Every Superhero has an origin story, telling how they gained their powers and decided to fight crime. It may be revealed in their first appearance, or not until an eventual flashback. But once established, it sets ground rules for which tropes are applicable to that particular superhero.note Superheroes that never get an origin story tend to be either a) not important enough to get an origin story, or b) intended as mysterious, a la The Phantom Stranger

The in-story explanation may be that the ultimate source of the hero's power is magic, Sufficiently Advanced Aliens, or Weird Science. However, the actual origin tends to boil down to one (or more) of these:

...each of which has its associated tropes. Any of these may be retconned into each other, whether in part or in full.note "Yes, you had a lucky accident, but the only reason you were able to survive that accident is because you're actually half-martian!" Supervillains can also get their powers in these ways, though their accidents tend to be more unlucky, thus initiating their Start of Darkness. Occasionally, these can be compounded across several characters with a Mass Super-Empowering Event. Note also that sometimes these powers aren't always so "spectacular", if you will. They can be particularly unusual, or only occur under weirdly specific circumstances, or may even be ultimately useless leading to What Kind of Lame Power Is Heart, Anyway?.

That's how they get their powers; motivations to actually fight crime include:

Often, the hero to be gets both powers and motivation in the same event, wrapped in one neat package. They may also get a supervillain arch-nemesis to fight, motivated and empowered by that same event.