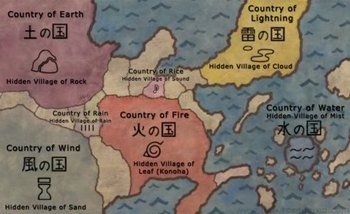 Not pictured: the Country of Heart.
"Water. Earth. Fire. Air. Long ago, the four nations lived together in harmony..."
— Avatar: The Last Airbender's Opening Narration
Advertisement:

This is when the process of defining nations in fantasy settings is to have each group be under the domain of one kind of magic. The main appeal to this is, naturally, the easy convenience of being able to define who is from what nation, since they'll have the appropriate elemental affinity to go with it, and the trappings of the culture itself will be clearly delineated by that element as well. This is often paired with tropes like Single-Palette Town in order to get the full effect. On the downside, this can sometimes result in a Planet of Hats situation on a small scale, since all members of a specific nation must, by definition, fit into the general archetypes of their nation's element.

Taken to extremes, the nation can fall prey to the problem of Poor, Predictable Rock.

Compare Elemental Plane, for when the physical location itself is elemental in nature. Naturally, there is often a lot of overlap.