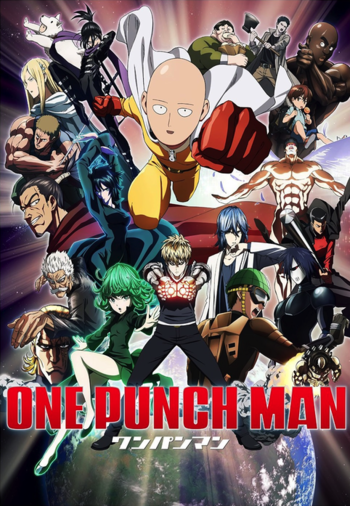 I wanna be the strongest hero!
"I became the hero I had always dreamed of being. But how can it be that, even though I should be satisfied, I feel so empty...?"
— Saitama
A terrible monster suddenly attacks Z-City without warning. Many innocents are killed instantly, and more continue to be wiped out by the terrifying fiend with each passing minute. But when all seems lost, one lone savior steps forward and destroys the monster with a single punch. Who is this mysterious protector? He is...
Advertisement:

Saitama is an unemployed Salaryman turned part-time Superhero who has become so powerful he can defeat any adversary with a single punch. He also happens to be extremely depressed about this, as it means he has no more challenges left in his life. But despite that fact, Saitama continues to follow his now utterly monotonous hero hobby, encountering Mutants, Cyborg soldiers, Ninja prodigies, Humanoid Aliens, Supernatural Martial Arts masters, Psychics, many a corrupt Super Team, Kaiju, Sea Monster terrors, and just about everything else you can imagine, all the while hoping that, someday, one of them might put up a fight that lasts longer than their Motive Rant.

drawn by Yusuke Murata of Eyeshield 21 fame, an English serialization of said manga in Viz Media's Weekly Shonen Jump, a drama CD, a Fall 2015 Anime adaptation from Madhouse, several OVA videos from December 2015 on, and an April 2019 second season anime by JC Staff.

An English dub of the series by Viz Media began airing on Toonami on July 16, 2016. The Japanese dub can also be streamed in the subbed form on Netflix for Season 1 and Hulu for Season 2.

An official mobile turn-based card RPG game called One-Punch Man: Road to Hero, was released in 2019. A console arena fighting game, One Punch Man: A Hero Nobody Knows, was released in February 2020, which focuses on the story up to the Alien Invasion arc and lets the player create their own hero. The series has also been in several mobile game crossovers, such as Grand Summoners and ShadowVerse.

Example of:
No, I Am Behind You