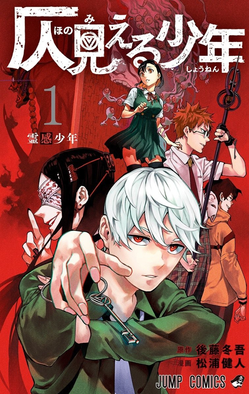 There's a rumor going around.
They say that if something strange and mysterious occurs, he's a guy you can rely on.
Advertisement:

Phantom Seer (仄見える少年, Honomieru Shonen, Transparent Boy) is a manga by Togo Goto with art by Kento Matsuura that ran in Weekly Shonen Jump for 30 chapters, from August 2020 to April 2021.

High schooler Iori Katanagi is rumored to be the guy you go to when something strange or mysterious is happening to you. One day Iori tells Riku Aibetsu, a girl with a knack for sensing danger, that she is being haunted by a Phantom, supernatural beings that hunt humans and cause strange occurrences. Luckily Iori is an exceptionally strong Shaman with the power to exorcize Phantoms, but he would much rather slack off than do his job. After Iori is forced by his Shaman sister Yayoi to help Riku, she discovers that she is a “beckoning hand,” with the power to attract Phantoms who endanger people. Hoping to achieve her goal of helping others by assisting Iori with his work as a Shaman, Riku teams up with him, much to Iori’s chagrin. But Iori has more secrets than he lets on, and the life of a Shaman is no picnic.

“Phantom Seer” is Togo Goto’s first manga in Shonen Jump, and is based off a oneshot published in Jump GIGA in 2017. Chapters are officially released in English the same day they are published in Japan, on Manga Plus