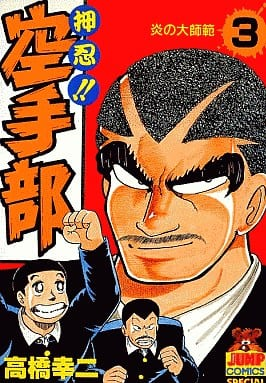 Osu! Karate Club (押忍!!空手部; Osu!! Karate-bu) is a 1985 manga written and illustrated by Takahashi Kouji that was published in Shuukan Young Jump.
Advertisement:

It began as a comical Slice of Life series about Japan's teenage delinquent gang subculture told from the perspective of Matsushita Tadashi, a 2nd year student at Kangokou High and a constant target of numerous bullies who beat him up routinely after school. He is accompanied by his best friend Saitou Takaki, who is also constantly harassed.

As the pair grows tired of being victimized they decide to join the titular Karate Club, which is notorious throughout Osaka's youth gangs for training and producing the city's most hardened teenage thugs while maintaining the facade of a legit school sports club. But when they join, they find themselves picked on just as much if not worse by their new upperclassmen.

The story gradually changed its tone to a more serious and violent martial arts manga, with the perspective changing from Matsushita to his mentor Takagi Yoshiyuki, the streetwise, tough-as-nails captain of the Kangokou Karate Club as he faces the power struggles between delinquent gangs in both Osaka and its neighbouring cities.

The series was influenced by Aa!! Hana no Ouendan and influenced stories like Cromartie High School in turn. It spawned a four episode OVA mini-series released from 1990 to 1992, a 1990 live action movie, and a 1994 Super Famicom fighting game.

The manga has been digitally released in English via Media Do.