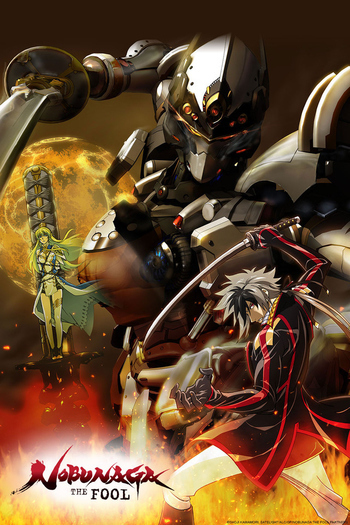 "Okay, stop me if you've heard this one: Nobunaga Oda, Joan of Arc, Leonardo da Vinci, Magellan and King Arthur walk into a script together, and the director looks at all of them and says, 'THE ONLY WAY THAT THIS IS GOING TO MAKE SENSE IS IF YOU LET ME ADD GUNDAMS!'"
— Demolition D+, "Super Serious Winter Anime Season First Impressions 2014

Imagine a Steampunk Space Opera version of the sixteenth century, complete with Humongous Mecha, spaceships, revamped historical figures, and Schizo Tech galore. Now throw in a prophecy involving a "Savior King" who is the only one who can pilot a special Humongous Mecha. Now make that man an incredibly attractive alternate version of Oda Nobunaga. That is Nobunaga The Fool, a stage play and anime created by Shoji Kawamori of Macross fame. The anime, animated by Satelight, began in January of 2014.

Long ago, there were two planets, now known as the Western Planet and the Eastern Planet, bound by the "Dragon Pulse" spanning the heavens. Though the civilization on the planets had once prospered, it soon was torn asunder by the inextinguishable flames of war, as endless battle engulfed both sides. However, there exists "sacred treasures", forgotten super technology that could revolutionize the world order. Sadly no one knew of them...nobody, that is, except for a certain "heretical girl."

Jeanne Kaguya d'Arc, a girl originating from the Western Planet, bore witness to visions of a "Star Messiah," who would be the one save the worlds. Together with Leonardo da Vinci, a man claimed to be "the one who observes the world", Jeanne embarks on a quest to the Eastern Planet. It isn't long before the two come across an Eastern heretic known as "the Greatest Fool of the Day": Oda Nobunaga, who winds up on the helm of an immensely powerful superweapon—one which can only be controlled by the legendary Savior King.

Sentai Filmworks acquired the license for the series.

Nobunaga the Fool contains the tropes of: