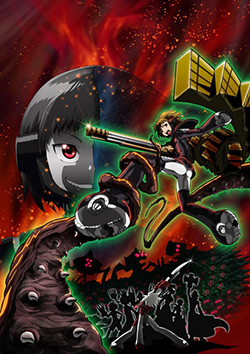 Sio Ogura is a Japanese high school student, who is visiting Taiwan on a school trip when she is suddenly attacked by monsters. Agents known as "E-Gene Holders" from the government agency DOGOO also arrive, who wield weapons infused with the spirits of historical figures. Sio is revealed to also be an E-Gene Holder when the soul of Oda Nobunaga awakens after she tries to rescue a friend.

Nobunagun is a manga series written and illustrated by Masato Hisa, serialized in Earth Star Entertainment's magazine Comic Earth Star from May 2011 to August 2015 and has since been compiled into six volumes. Animated by studio Bridge as part of the Winter 2014 Anime lineup.