A Wizard Did It 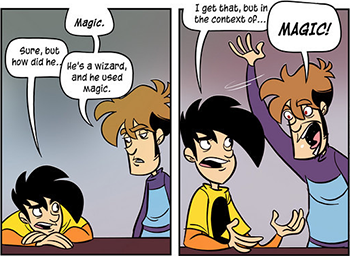 Question not the affairs of wizards....
Frink: Yes, over here, n'hey, n'hey. In Episode BF12, you were battling barbarians while riding a winged Appaloosa, yet in the very next scene, my dear, you're clearly atop a winged Arabian! Please to explain it!
Lucy Lawless: Uh, yeah, well, whenever you notice something like that... a wizard did it.
Frink: I see, alright, yes, but in episode AG04—
Lawless: Wizard!
— The Simpsons, "Treehouse of Horror X"
Advertisement:

No need to describe this trope, it's just magic.

The standard all-encompassing explanation for any continuity errors noticed by hardcore fans of any given fantasy show: If it doesn't make sense, A Wizard Did It. Move on, nothing to see here!

Can be used to Hand Wave away minor nitpicks and Contrived Coincidences that should really be covered by Willing Suspension of Disbelief - if it didn't happen that way, there wouldn't be a movie, or magic genuinely is involved in the story. However, having to use it to excuse major Plot Holes that the creators really should've caught beforehand will make people rightly angry.

Often used in the literal sense, i.e. something that would be impossible happens because someone explicitly used magic (magic that only they know) to make it happen. However, this trope is not about magic per se,note We could have called this trope 'The Sufficiently Advanced Science/Aliens Did It' if we wanted to. but any kind of handwave; it happened because the author wanted it to, end of story.

On that note: In fantasy with wizards, before linking to this trope, note that it's important that either the Wizard in question remain unidentified, or, failing that, what exactly they did remains unspecified. Remember, this is a kind of Hand Wave: we're being asked not to look too closely because "it's like that because we said so". Further side note: If an explanation is offered in a later sequel or bit of "expanded universe" content, it can still count as this in the original work, especially if the later explanation has more than a slight whiff of Retcon. A well-written work that involves magic should have at least some basic notion of what magic can and can't do, see Magic A Is Magic A.

Note that this explanation can potentially bring more Fridge Logic into a story, e.g. when the explanation given later fails in a situation in some way that could have easily been solved by doing what they apparently did before. This can also lead to Reed Richards Is Useless when you realize the possible, fantastic uses of that random trick nobody seems to care about.

Also known as God of the Gaps,

after the famous Hand Wave "(The) God(s) did it". Another Memetic Mutation is "It's magic, I ain't gotta explain shit."

Not to be confused with The Butler Did It. Or with Doing In the Scientist, which is when a wizard did something that was originally explained by science.

Alternative Title(s): Wizard Did It, God Of The Gaps