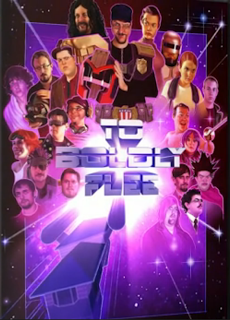 USS Exit Strategy
To boldly flee where no one has fled before.
Advertisement:

They took Chicago. They conquered Molossia (for about a week). They survived suburbia. Now, it's time for... SPACE!

To Boldly Flee is the fourth anniversary video event of the website Channel Awesome. Continuing from where Suburban Knights left off, one year later, The Nostalgia Critic is depressed over the loss of Ma-Ti. A galactic threat is brewing, beginning with the appearance of a gigantic "Plot Hole" in space and the vendetta of a bitter Turrell. Put under house arrest by the government for breaking copyright laws with his reviews, Critic discovers the wormhole has some connection to mysterious messages being sent by Ma-Ti, whose body may have died — but the "character" is still in the ether somewhere!

He responds by converting his house into a spaceship and blasting off to find him, defeat Turrell and his allies, prove his innocence so he and his friends can keep their jobs, and stop the hole from disrupting space and time. Comedy, science-fiction film parodies, jabs at Hollywood politics, and dramatic moments ensue.

Linkara's Atop the Fourth Wall movie is a semi-sequel to this film, dealing with fallout of the events of the Plot Hole.

The first of the film's eight parts premiered on That Guy With The Glasses on August 23, 2012, and it concluded on September 13th. The full movie can be watched here.

Not to be confused with That Guy with the Glasses in Space, a Dark Fic written before To Boldly Flee existed.

To Boldly Flee provide examples of:

open/close all folders
A-M
Advertisement:
N-Z
I... am the Nostalgia Critic."
Feedback

He literally has to ask tech support where the on button is on his computer.

He literally has to ask tech support where the on button is on his computer.