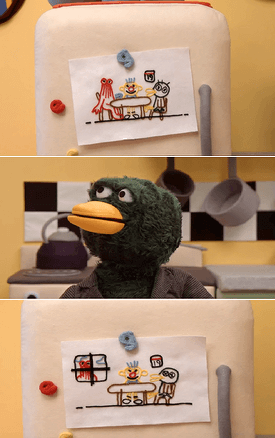 This trope happens when a continuity error or several is made intentionally, either to hint at oddities within the story, as the result of a reality change, add a layer of mystery, or to make fun of the fourth wall.

Maybe someone's shirt will change mid-scene. Maybe a tree that was there one day is no longer there the next, or maybe it moved ten feet down the block. Characters may come Back from the Dead with no explanation and a denial that they ever were dead to begin with. This is only a few specific forms this phenomenon can take. The characters may or may not be aware of it, but if they are, it'll no doubt create confusion as their own reality is inconsistent with itself. If they aren't, it's likely there for the audience to try and piece things together.

Usually, this implies that something about the very fabric of the character's reality is wrong or becoming imbalanced. As such, it works very well as a part of a Mind Screw work, but doesn't need to be. While it's often long-term continuity that's being messed up, it may still appear in a series with loose or Negative Continuity. Usually Played for Drama, with the errors being serious and often hinting at a greater problem; can be Played for Laughs in scenarios poking fun at the Fourth Wall or common editing mistakes. What counts isn't the purpose behind the errors, but the fact that they're there for a purpose at all- the story wouldn't be quite the same without them.

Sometimes there will eventually be The Reveal about why these things are happening, but it's not absolute, and depends on the story.

One specific variant is The Little Shop That Wasn't There Yesterday, where a mysterious store appears from nothing and disappears just as quickly, and Vanishing Village, where an entire community can appear and disappear at will. Another subtrope is the Backstory Invader, a character who suddenly appears in a story without explanation and is mysteriously accepted by the other characters as always having been there. This might occur as part of a "Groundhog Day" Loop, with small changes happening each cycle. Another possibility is that everything is All Just a Dream, with the inconsistencies being a clue. Another common variant is a character's memories being imperfect retellings of the original scene, due to the limits and failings of their own mind.

Compare Plot Hole, which works have a tendency to Lampshade. Also compare A Glitch in the Matrix and Cosmic Retcon. May overlap with Spot the Thread. In a Gaslighting situation, the gaslighter might make these changes on purpose to undermine their victim's sense of reality. This may also come due to the actions of a Reality Warper, the result of a Merged Reality blending the timelines, or part of a Fourth-Wall Observer noticing the errors others wouldn't.

Note: Before adding an example, consider if the error's removal would change anything about the work's plot, setting or meaning, and if it's caused by anything in the story itself. If neither of the criteria fits, it falls under Easter Egg instead.

The examples have been arranged alphabetically. Please put your examples in the proper place.