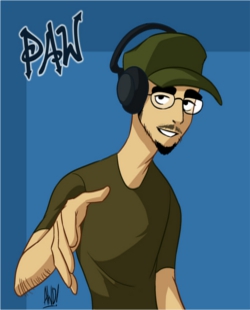 Paw Dugan (Paul Schuler) was the resident music guru at Channel Awesome. The scruffy faced sonic critic tackled everything from music videos, tunes from past, present, and future, video game music specials, being a Let's Player with fellow That Guy With The Glasses personality and all around lovely geek girl Pushing Up Roses, and co-hosted the official TGWTG podcast Transmission Awesome. He also hosted a review series called Music Movies in which he reviewed movies that prominently feature music.

He quietly ended Music Movies and generally stopped making videos altogether after 2015 in order to focus on raising his family. Also, a large number of his Music Movies episodes have been lost, likely due to copyright issues.