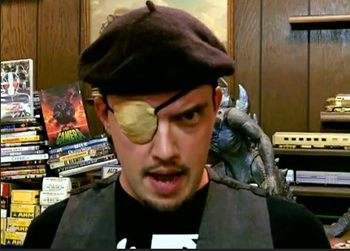 Let me pitch it to you: Matt Burkett is Apollo Z. Hack. Hack is not just a web based movie reviewer, for he is destined to be the either the savior of the Reviewaverse, or the destroyer. He periodically releases reviews of movies that he feels are under appreciated, but his biggest claim to internet fame is The Reviewaverse Saga - a seven part epic about the resurgence of an ancient Nerd civilization, a coming Nerdpocalypse, and references to Battlestar Galactica and the Kamen Rider series. The Reviewaverse itself is home to all internet reviewers, including the people at Channel Awesome, Spoony, the Angry Video Game Nerd, etc. And in Burkett's hands, the act of reviewing becomes something epic and meaningful.
Advertisement:

Reviews with an overarching plot isn't new - Linkara did it before - but The Reviewaverse Saga is perhaps the first to focus more on the plot than the actual review. An episode of the saga will start off explaining the plot, then a character would mention a movie offhand, a review ensues, then the plot continues.

Can be found on Reviewtopia

and The Punk Effect

So let me pitch it to you: