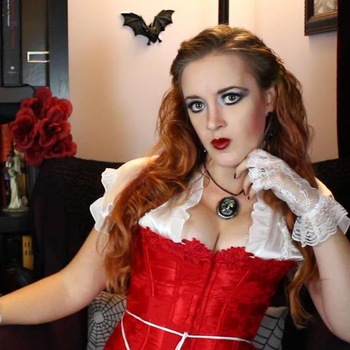 is a Video Review Show covering vampire-related movies, TV shows, books, wine, perfume - anything with a vampiric bent, presented by the Maven of the Eventide, a brooding, gothic figure possessed of the dark, romantic, hypnotic allure of the classical vampire.

Or so she'd like to imagine, anyway. Maven is really Elisa of Team NChick indulging her Vampire Vannabe fantasies. When she forgets to stay in character, a ditzy Valley Girl emerges through the corsets and dark eye shadow, and any time she tries to impose her vampire fetishism outside her bedroom full of candles, roses and skulls, she gets knocked back by the real world, mostly represented by her roommate Lindsay Ellis (formerly The Nostalgia Chick), who is flatly unimpressed by her antics and keeps telling her to get a job and start paying her share of the rent. Also refusing to play along are Team NChick's Nella, Kyle "Oancitizen" Kallgren of Brows Held High and occasionally Todd in the Shadows. Also, her other roommate Dan Roth, but no-one ever remembers him.

The series began when the popularity of Twilight prompted Elisa (Hansen, the real Elisa) to take a deeper look at vampires in fiction. Like The Nostalgia Chick, Vampire Reviews takes a non-chronological approach to reviewing, interspersed with sketches for greater illustration and entertainment. Incidentally, Elisa started her own saga of books featuring vampires (amongst other things) with The Immortal Journey in 2019.