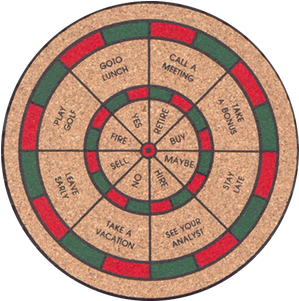 When you must make a difficult choice, what better way to resolve things than by writing a list of the options, then tacking it to the wall and throwing darts at it (perhaps while blindfolded)? Sometimes this can indicate that the character doesn't care much about the outcome of the choice, which might be something quite trivial. Variations include: