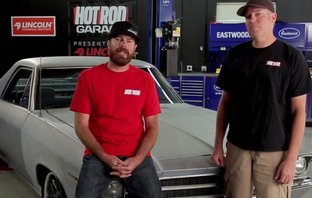 Our hosts note  Finnegan (left) and Freiburger (right) , before preparing to do an engine swap in 3 days. Live. What Could Possibly Go Wrong?
"I'm Freiburger, that's Finnegan. This is the show where we play with cars and you point and laugh. We call it: Roadkill."
—David Freiburger
Advertisement:

is an unscripted car show on Motortrend On Demand. It's hosted by former editor of HOT ROD Magazine David Freiburger and Mike Finnegan. (The former left the magazine to do the show full time.) The premise is that they take an old project car, often The Alleged Car, and go on some sort of journey or Zany Scheme. Despite the format, it's an hour long show with production values good enough to be on TV. note  the Discovery Channel network actually airs Roadkill episodes on cable TV on the Motortrend channel.