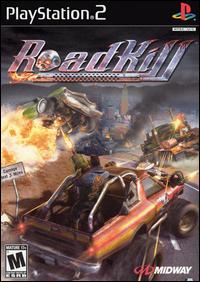 ''Flesh, to bone, when The Rot begins to play. Bone, to dust, and your life is blown away." - The Fuzz Brothers

Roadkill is a Vehicular Combat game developed and published by Midway Games in 2003 for the Xbox, PlayStation 2 and Nintendo GameCube. It combined Twisted Metal -style combat with a Grand Theft Auto- like free-roaming mission structure. It featured a rockin' soundtrack of both real and written-for-the game songs, and four-player split-screen multiplayer. The game was only mildly hyped prior to release and thought it met with good reviews, it is to this day relatively obscure, like many Vehicular Combat games that aren't Twisted Metal.

In the 1980s, a deadly plague known as The Rot struck the world, killing untold millions and bringing society to its knees. An unspecified time later, the world is divided up into isolated pockets of "civilization" separated by vast wasteland. The game focuses on three small cities located relatively close to one another: Lava Falls, Blister Canyon and Paradise City. You play the role of Mason Strong, professional tough guy. Some years prior, he helped a man named Axl and his gang, the Sentinels, take control of Paradise City and drag it screaming out of tribalism into something resembling a functioning society. They had a falling out, and Mason was Left for Dead. Now he's back for revenge.

He can't just go straight for Axl, though. There's a whole bunch of unruly street gangs between him and Paradise City, and he's gotta get through them first.

explode on contact. Before you get the better upgrades, these can be one-hit kills. In the first version of this mission, your worst enemy will be the awkward camera angle you're stuck at.

Shout-Out: The Pompous Political Pundit is named Stu Pickles, and he mentions having a son named Tommy.