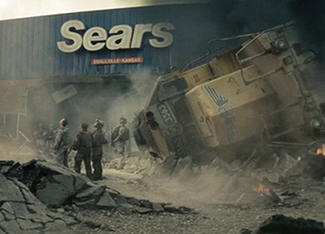 This is not how you install a drive-through.
"But when Zod sends [Lois Lane] a message on this Nokia phone, it’s up to Superman to take him on with this U-Haul truck through this 7-Eleven back to the IHOP and inside this Sears."
— Honest Trailers for Man of Steel
Advertisement:

There are movies, series and other things which incorporate (or they must, even if the story doesn't warrant it) some Product Placement either obviously or subliminally. So, it looks like you'll have to watch it standing there, even if it's annoying the hell out of you. Right?

WROOOONG!!!! Do you have a McDonald's® standing in the middle of a fight between the hero and the villain? Why not destroy part of it in order to use the frying oil against the villain? Do you have a Pepsi® truck in the middle of a car chase scene? Why not have a bunch of cars crash into it in order to make it explode? Or why don't you just have the characters destroy an entire mall while they fight each other with all sorts of punches, kicks and gratuitous use of Apple® products against each other's faces?

Usually, this is done for two purposes:

It's also done in order to bring the product placement to the forefront of the action rather than relying on the subliminal. For example, instead of having a Coca-Cola® can on a table and hoping the viewer's mind picks up on it, the characters pick it up and use it to hit others so the viewers will see it a bit more obviously.

Sometimes the products will remain intact when advertisers don't want to see their expensive product shown being damaged, broken or destroyed in any way whatsoever for fear that people won't be interested in it. In that case, said products will be shown as being Made of Indestructium (see also the subverted examples).

Compare/contrast Product Displacement, in which there's no destruction, but you certainly won't see the product itself. See also Our Product Sucks, in case a print ad or a TV commercial does this sort of destruction. See also Biting-the-Hand Humor, for when the movie/show pokes fun at the company/network itself.

If you can't use the actual product, just use a Shoddy Knockoff Product. It's just as effective. (BOOOOOM!) *winks!

Marlboro and Coca-Cola are the unsung casualties of this Kryptonian battle.

Marlboro and Coca-Cola are the unsung casualties of this Kryptonian battle.