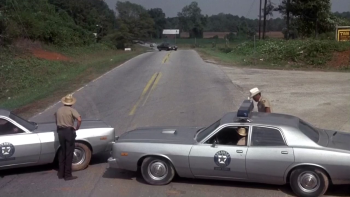 The police are just waiting for our fleeing heroes to arrive at their Road Block. Too bad they don't know the heroes are going to escape with Slo-Mo Big Air, or that they know another way; the roadblock will only be rammed by other police cruisers. Alternatively, the heroes will cleverly bluff past the guards, who are often incompetent.
Advertisement:

Also used by security departments of evil corporations and road construction crews. And the policemen are not always police — if you are relieved to see them, or don't care, it's very likely they aren't.

In video games, road blocks serve other purposes and are used excessively to avoid player wandering off the map or from reaching an area they aren't supposed to be at yet. Contrast Absurdly Ineffective Barricade and Checkpoint Charlie.