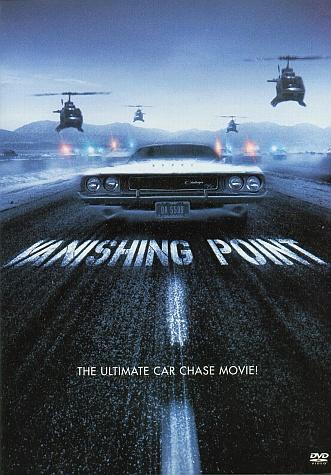 Vanishing Point is a 1971 American action road movie directed by Richard C. Sarafian and starring Barry Newman and Cleavon Little. Arguably the Trope Maker/Ur-Example of the car chase movie, or in any case the Trope Codifier.

In a post-Woodstock '70s US, Kowalski (Newman) is a car delivery man with a mysterious past and no first name given, now working for Argo's Car Delivery Service in Denver, Colorado. The film opens on Sunday, 10:02 am, with him driving a white 1970 Dodge Challenger into a roadblock with the police in hot pursuit. Just before he hits it, however, the film flashes back to two days earlier. Kowalski has been assigned to deliver the Challenger to San Francisco, and makes a bet with his dealer Jake (Lee Weaver) that he can get there in just fifteen hours. Setting off, Kowalski ends up running afoul of the police when he runs a motorcycle cop off the road. A blind African-American DJ at KOW known as Super Soul (Little) listens to the police radio frequency and encourages Kowalski to evade the police. By doing so, he is turned into an overnight folk hero, revered by the counterculture scene across the west.

Along his journey, Kowalski encounters a man who collects snakes, a faith healer named J-Hovah, a pair of gay carjackers, and a nude woman on a motorcycle. We eventually learn Kowalski's past: he is a Vietnam veteran who later became a cop, but quit when his partner molested a woman, then became a car and motorcycle racer until two near-fatal accidents forced him to retire, and then became the "adrenaline junkie" he is today. Vera, the only woman he ever loved, died in a surfing accident.

Does Kowalski evade the police and make it through the roadblock? Does he make it to San Francisco? Find out!

Was remade in 1997 as a Made-for-TV Movie starring Viggo Mortensen, Jason Priestley, and Keith David. Many of the characters are heavily changed; in the remake, Kowalski (who now has a first name, Jimmy) is a Gulf War vet trying to get to his pregnant wife in Idaho, while the DJ is now a right-wing shock jock named "The Voice" who views Kowalski's race home against the police as a battle against government oppression.