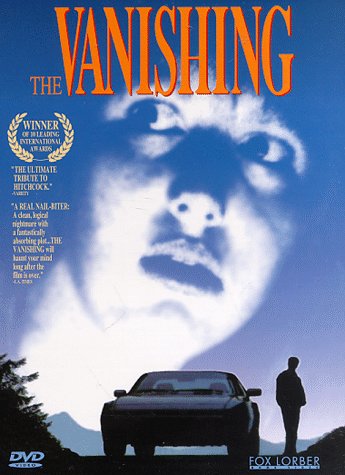 The Vanishing (known in Dutch as Spoorloos; literally "Traceless" or "Without a Trace") is a 1988 Dutch thriller film directed and co-written by George Sluizer, adapted from the novella The Golden Egg by Tim Krabbé (who also co-wrote the screenplay).

Rex (Gene Bervoets) and Saskia (Johanna Ter Steege) are two young lovers on holiday. After Rex makes a fateful stop at a service station, he comes out to find that Saskia has disappeared. Rex spends the next three years trying to find her, pleading his case in the media and severely hurting his new relationship in the process.

Eventually, Rex receives some postcards from a chemistry teacher named Raymond Lemorne (Bernard-Pierre Donnadieu), who insinuates that he knows what happened to Saskia. The question then becomes this: with his desire for the truth crossed over into obsession, how far is Rex willing to go to finally find it?

The film was remade in 1993 by the same director with Kiefer Sutherland, Jeff Bridges, Sandra Bullock, and Nancy Travis. There was also a BBC radio play version in 2011.