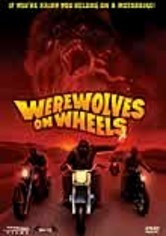 "They met the Bride of Satan!"

Werewolves on Wheels is a 1971 biker horror film.

The Devil's Advocates are a biker gang riding the Southwest United States. Two of their members encounter a Satanic cult, which curses them with lycanthropy. Mayhem ensues as the gang try to evade the cult and slowly each fall to the werewolf curse...