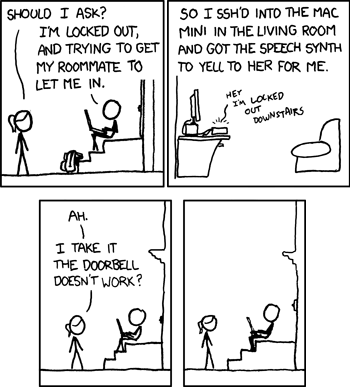 Sadly, this is a true story. At least I learned about the OS X 'say' command.
Lister: Why don't we scrape away this mortar here, slide one of these bricks out, then using a rope weaved from strands of this hessian, rig up a kind of a pulley system so that when a guard comes in, using it as a trip wire, gets laid out, and we put Rimmer in the guard's uniform, he leads us out, we steal some swords, and fight our way back to the 'bug!
Kryten: Or we could use the teleporter.
Lister: Or, in a pinch, we could use the teleporter.
— Red Dwarf, "Rimmerworld"
Advertisement:

There is a problem. A dramatic, elaborate, and dangerous (and sometimes, pretty darn cool) solution is proposed to solve it. It's the Only Way! Then some other jerk points out that a much simpler Mundane Solution exists that would probably be more effective.

Most often, it's a villain (usually of the Diabolical Mastermind or Evil Overlord variety) proposing the complicated scheme, and it is a savvy minion (or occasionally even The Hero himself) questioning their boss's grade-A Bond Villain Stupidity. However, it's not unheard of for clever villains to brag about the fact that they're eschewing elaborate Death Traps and intend to just shoot the hero, making them a No-Nonsense Nemesis. Sometimes, it's a Hyper-Competent Sidekick wondering why the hero is adhering to Honor Before Reason.

There are fanfictions written for this sole purpose.

See also Why Don't You Just Shoot Him?, Sherlock Can Read, Actually a Good Idea, Lampshade Hanging, and Impossibly Mundane Explanation. Just Eat Gilligan is built around not having anyone do this. If someone actually does the simple solution, Surprisingly Realistic Outcome occurs. If the simple solution is well acknowledged as an oversight, expect Didn't Think This Through to be a response.