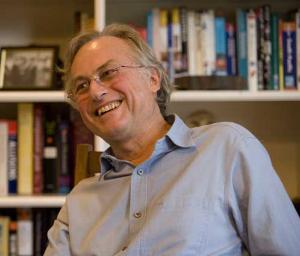 "There's real poetry, in the real world. Science is the Poetry of Reality."
— The Enemies of Reason
Advertisement:

Clinton Richard Dawkins (born March 26, 1941 in Nairobi, Kenya) is an evolutionary biologist and an outspoken atheist who, in addition to his work in biology, is also critical of religion and religious people, as well as of supernaturalism, superstition and alternative medicine. He has written and presented several documentaries on British television, has written a number of books and gave the Royal Institution Christmas Lectures in 1991.

Of his works to date, Richard Dawkins is best known for The Selfish Gene, a book on evolutionary biology from a gene-centred perspective, the two-part documentary Root of all Evil?, and his 2006 book The God Delusion. In the latter, he presents a case against the idea of a theistic god and criticises the attitudes and behaviours of religious practitioners. The book was not the first criticising religion, and it was not the first time that Dawkins had done so in his works, but it has attracted much attention to the point where it tends to eclipse all his other work.

In The Selfish Gene, he coined the word "meme" to discuss how culture is transmitted, by analogy with genes and with mimesis. Interestingly enough, a rival coinage, culturogen, was coined at roughly the same time, but by a process of memetic competition the word meme became more popular and the word culturogen is almost never used any more. Although he often refers to it, he admits his initial coinage was not a serious cultural theory but was mostly used to make an illustrative point about his theory of replicators.

Despite being accused of being a militant atheist, his modus operandi is to vocally criticise religious (and superstitious) ideas and practices. He relies primarily on public campaigns to raise awareness, most notably funding the atheist bus slogan campaign: buses were sent out in London bearing on their sides the slogan 'There's probably no God. Now stop worrying and enjoy your life'. Easily his most controversial move has been to post tweets giving his controversial views, given how many of them read, most notably the case involving blogger Rebecca Watson, an Uncomfortable Elevator Moment she details in a video

Apart from this, there's also his work promoting scientific understanding among the general public, which was his role as Charles Simonyi Professor for the Public Understanding of Science at Oxford University (a position that he held from 1995 to 2008, when the mandatory retirement age rules of the University forced him to retire), Oxford also being the place where he studied. More recently, he campaigned during the Pope visit to Britain to have the Pope arrested on suspicion of conspiring with other levels of the Church to cover up child abuse scandals, and he supported the Singh side of the Singh vs. Chiropody controversy.

He played himself in a news clip in the Doctor Who story "The Stolen Earth". He was also formerly married to Lalla Ward, who played the second Romana in that show. In 2016, they announced an amicable separation. The two met via Douglas Adams (who was writing the show at the same time Lalla Ward was starring in it), who Dawkins referred to as "Possibly my tallest convert".

The Trope Namer for: