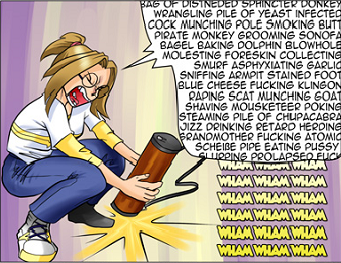 A character or a thing or an activity or a concept (anything really) is described using tons of adjectives or adverbs in one very long sentence that can be run-on in extreme cases. Hyphenated descriptors are often used to deliberately stretch the length.

Related to Purple Prose, but the former incorporates many more writing tropes (such as Sesquipedalian Loquaciousness) and doesn't always use this one. Sometimes it overlaps with Flowery Insults. This trope is very often linked to exasperation, and characters speak in this way to relieve their stress and vent their frustration. Some of the adjectives or adverbs may be uttered in Angrish. Some of them may be Perfectly Cromulent Words.

Large Ham Announcer is likely to heap adjectives one after another and describe contestants with flowery epithets in this manner, too. May also happen with a Motor Mouth, for more emphasis on the "rapid-fire" side of things.

Often Played for Laughs. Compare Try to Fit THAT on a Business Card!.