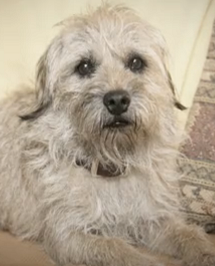 Ruffles, a Greendale student.
Annie receives word that rival school City College made an attack ad aimed towards Greendale, claiming that it gave a degree to a dog. The Save Greendale Committee then enters crisis mode as they try to figure out whether or not those claims are true. Meanwhile, a drunk Britta soils her pants.