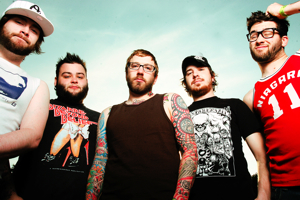 Alexisonfire (that's "Alexis On Fire", not "Alex Is On Fire", nor for that matter "Al, Ex Is On Fire" or even "A! Lex Is On Fire!") is a Post-Hardcore band from St. Catharines, Ontario, active from 2001-2011. The band is named after Alexis Fire, the world's only lactating contortionist stripper (yes, really). Their style, described by the band as "the sound of two Catholic high-school girls in mid-knife-fight", featured stark contrasts between soaring melody and brutality, through the interplay between three singers. Their self-titled debut is considered a landmark of its genre and their other three albums went platinum in Canada.

The band broke up in 2011 as singer/guitarists Dallas Green and Wade MacNeil left to focus on their side projects, as well as due to "personal issues". Despite George Pettit's initial statements to the contrary, however, the band seems to have parted ways on more or less amicable terms after giving a farewell tour in 2011-2012.

In March of 2015, the band announced that they are reuniting and will play a short run of shows in Britain and Canada, and one show in the US. Naturally, this caused quite a stir.