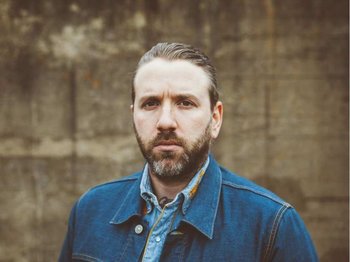 City and Colour is Canadian singer/guitarist Dallas Green's side project begun while he was still in the Post-Hardcore band Alexisonfire. (Technically, though, he'd begun composing the various songs that would eventually make their way onto the albums since his early teenage years.) The genesis of the act lay in the various demo tapes Dallas had recorded and distributed to a limited extent, which found their way to the internet eventually, prompting various Alexisonfire fans to voice their support of Dallas releasing a solo record. Dallas, not yet certain of branching off into a solo side project while still fully engaged with Alexisonfire, decided that if people liked the demos—some of which were of marginal quality—he'd at least record more put-together versions of them and release the tracks on a solo album. (These songs did not make their way onto Alexisonfire albums due to the fact that the band members had agreed early on that all five of them will be equally involved in the creative process for any songs that would be on the band's albums.) Not feeling comfortable with putting his real name on the record, he came up with the moniker City And Colour to release the solo materials under. The resulting record, Sometimes, met with positive reception, eventually going platinum in Canada.

Heartened by his success, Green began gathering and composing material for his second solo record, Bring Me Your Love, intending it to be less compilation-like than Sometimes. Featuring a more folksy sound than his debut and a wider range of instruments, the album dealt with much of the similar issues addressed in Sometimes—life's troubles, uncertainties of the future, the pursuit of romance under these constraints, and hope. The album peaked at #3 on the Canadian Albums Chart after release.

Dallas's third solo album, Little Hell, was released in 2011. Featuring an even wider musical variety than Bring Me Your Love, ranging from the solo guitar/vocal work that had dominated the earlier releases to hard rock, the third album also expanded its subject matter, offering emotional self-reflection as well as tributes to family and friends—including Dallas's now-wife Leah Miller, who he married after the release of Bring Me Your Love.

As City And Colour gained popularity, and Dallas engaged on more tours to support the project, balancing the workload between Alexisonfire and his solo work became more and more difficult. With Dallas deciding to focus more on his solo act, and fellow bandmember Wade MacNeil also forming a side project solo act, Alexisonfire could no longer actively perform and record. Compounded with unspecified personal problems, this schedule conflict resulted in the band disbanding, with a farewell tour given during 2011-2012.

Dallas's fourth solo album, The Hurry And The Harm, was released on June 4, 2013.

Dallas released his fifth record, If I Should Go Before You, on October 9, 2015. The album showcased a stylistic shift towards blues-rock and had darker palette of sound compared to his earlier efforts.

This band and its music provides examples of the following tropes: