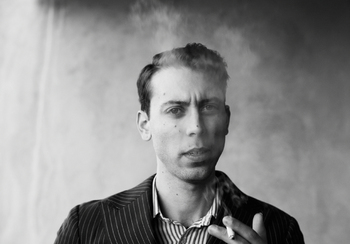 Hunger is a dream you die in.
Advertisement:

Daniel Tavis Romano (born 1985) is a Canadian musician from Welland, Ontario. He began his musical career as a member of the punk band Attack In Black, but is currently focused on making Country Music, having released several solo albums in the genre. The National Post calls his solo output "Country Music for People who Don't Like New Country Music"

Apart from his solo efforts, Dan has also provided instrument work, production, and cover art for fellow musicians, as well as going on tour with them as part of backing bands. The closest relationship he has established in this regard might be with Dallas Green of City and Colour, with whom he has gone on tours in support of the latter's albums Bring Me Your Love and Little Hell. Dan was also responsible for producing the cover art of Bring Me Your Love, and played a variety of instruments on both albums.

Beware, my good friend's a troper, roving around in our fair land:

And I still don't even have a cent...