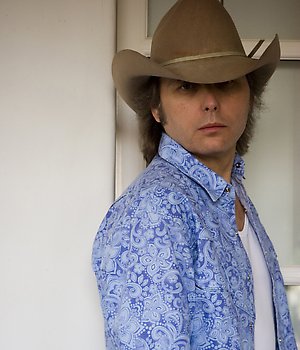 Check out those epic sideburns.
Advertisement:

Dwight David Yoakam (born October 23, 1956 in Pikeville, Kentucky) is a highly underrated and at times misunderstood country artist active, since the 1980s. Though he's had his fair share of radio hits, people consider him a nice alternative to mainstream country. He's known for being very different than most country artists out there, but at the same time still selling well (25 million records worldwide).

He began his career in Nashville, Tennessee (what else would you expect?) in 1984, struggling at first since Honky Tonk was considered a Dead Horse Genre. After he was laughed out of Nashville, he moved to Los Angeles, California in hopes that he could gain a better audience; he has been living there ever since. His first release was self-financed, this being unique for the Country genre at the time. He soon caught on and gained some popularity. His video for "Honky Tonk Man" was the first Country music video to ever be played on MTV.

His biggest album was released in 1988, titled Buenas Noches From a Lonely Room. It won him critical acclaim, and very high sales. The album almost hit number 1 on the Billboard 200. If the album had succeeded, he would have beaten Garth Brooks to the title of first Country Music album to debut at that position.

He then released 2 more studio albums that got similar acclaim, but significantly smaller sales. Honky Tonk was slowly starting to die out by the mid to late 90s. Since then, he remains popular in name, but not quite in style. Despite being a legend amongst Country artists, he usually doesn't get much recognition as he used to. Nevertheless, his older music is still fondly remembered.

He became something of a Reclusive Artist around the 2000s, mostly due to a long string of Troubled Production. He then brushed the world with a surprise album in 2012 named 3 Pears. The album garnered Yoakam with some of the strongest reception he's had in his career and has brought a new attention to the honky-tonker that hand't been shown before.

As a side note, he's worked as an actor as well. He plays a damn scary lead villain (take a look at his role in Sling Blade).