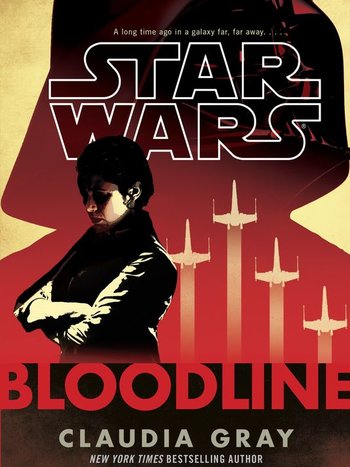 An entire generation has prospered during an era of peace. The New Republic,
governed by the Galactic Senate, has held power for more than two decades. The wars
that divided the galaxy are fading into legend.
Yet conflict has begun to take shape within the Senate. In the absence of MON
MOTHMA, former leader of the Rebellion and first chancellor of the New Republic,
two unofficial but powerful factions have formed—the POPULISTS, who believe
Advertisement:
individual planets should retain almost all authority, and the CENTRISTS, who favor
a stronger galactic government and a more powerful military.
Only the greatest heroes of the war are still honored by all. A ceremony honoring
the memory of BAIL ORGANA has drawn the Senate together in rare harmony. It is a
day of celebration, but even now, the divisions among the worlds of the galaxy are
growing wider…

Bloodline is a Star Wars Expanded Universe novel written by Claudia Gray (who previously authored Star Wars: Lost Stars) that covers a series of crucial events that occur twenty-four years after Return of the Jedi and six years prior to the events of The Force Awakens. Set from the perspective of Senator Leia Organa, the book reveals the political state of the Galaxy after the collapse of the Empire and covers the origins of the First Order/Resistance conflict.

Not to be confused with Bloodlines, the second book in the Legacy of the Force series, which is set in a completely different Alternate Continuity.