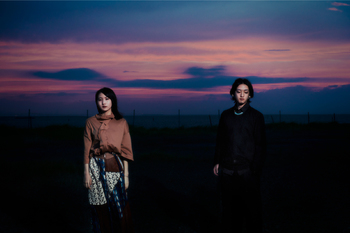 Yoasobi (stylized as YOASOBI) is a Japanese music duo under Sony Music Entertainment Japan, consisting of composer Ayase and vocalist Ikura. Ayase was a Vocaloid music producer who debuted in 2018 when he released the song "Sentensei Assault Girl" on Nico Nico Douga and YouTube, while Ikura, real name Rira Ikuta (Japanese: 幾田りら) was a singer-songwriter who released two mini-albums in 2018 and 2019.
Advertisement:

YOASOBI was formed in 2019, and produces songs with lyrics based on web novels released on monogatary.com

, a website operated by Sony Music Japan. Their first song was "Yoru ni Kakeru" (lit. Racing into the Night), released on YouTube in 2019, based on the web novel "An Invitation From Thanatos" by Mayo Hoshino. "Yoru ni Kakeru" became a massive hit in Japan and quickly propelled YOAOSOBI into stardom.

Ayase and YOASOBI's official YouTube channel can be found here

Note: Names in Italics are transliterations of the original video's Japanese title, and are unofficial names.

Tropes about Ayase, Ikura and YOASOBI