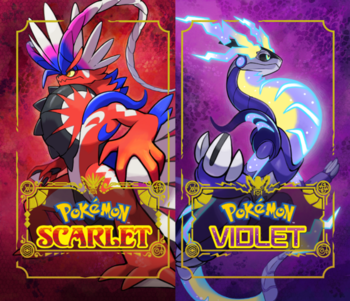 Welcome to the open world of Pokémon.
Advertisement:

Pokémon Scarlet and Violet are the first pair of Generation IX games in the main Pokémon series, and released on Nintendo Switch on November 18, 2022. They feature an open world, building upon the foundation set by Pokémon Legends: Arceus. The games take place in the Paldea region, based on Spain and Portugal.

The player has just moved to Paldea with their mother, and immediately enrolls in Mesagoza's academy (Naranja Academy in Scarlet or Uva Academy in Violet). As part of the academy's curriculum, the player is tasked to go on a Treasure Hunt; a prestigious assignment given to all academy students in order to encourage them to find their greatest treasure while trekking the region. During their quest to find that which is their treasure, they meet three people who need help achieving certain goals:

Meanwhile, as the player adventures through the region, they stumble upon Koraidon (Scarlet)/Miraidon (Violet) and earns their aid. Assigned to look after the Legendary Pokémon recovering their strength, the player goes around Paldea for the Treasure Hunt, oblivious to the mysteries that surround the Great Crater of Paldea at the heart of the region...

The game encourages an open-world dynamic by letting the player do any of the three quests in any order they wish to complete them- so unlike most games in the series, you can become the League Champion before defeating the evil team.

Capturing Tera Raid Pokemon has its own unique animation.

Capturing Tera Raid Pokemon has its own unique animation.