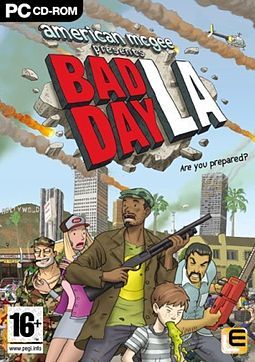 From left to right: The Sargeant, Beverly, Anthony Williams, The Sick Kid, and Juan.
Advertisement:

Bad Day L.A. is a PC game designed by in 2006 by American McGee and developed by Enlight Software, where the player is Anthony Williams a former Hollywood agent turned vagrant. Taking place in the city of Los Angeles, California the city is suddenly hit with a ton of disasters ranging from an earthquake to a terrorist attack all at the same time. With everything going to hell, it's up to Anthony to save the day.