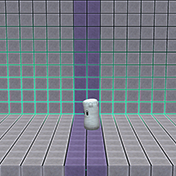 Say your prayers, Sandbag. I'm going to stop by a lot.
Advertisement:

Fighting Games are Serious Business. Therefore, there needs to be a serious place of study. That's why these are always there. This arena, which is usually called the Training Room or something similar, is almost always a plain-colored, distraction-free arena. The background or floor usually involves glowing or clearly defined grid lines or tiles for purposes of distance-measuring units to study attack range and Combos.

These stages are always Fixed-Floor Fighting arenas. If a game has environmental hazards to differentiate the stages from one another, this stage will always be without them, which, if they're available in versus play, will almost invariably make them popular in Tournament Play.

In many competitive fighting games, the Training Stage is one of the most important tools for an improving player to use. There is a lot to be aware of when learning one's way through a Fighting Game title, and so this Training Stage features visual and kinetic tools that encourage experimentation and make it easier than ever for players to hone their craft.

Usually a Fighting Game trope, but can also show up in other games, particularly in survival or strategy-based settings, as well referenced in other media.

Not to be confused with any room that's used for training by a character within the work, unless it matches the aesthetic. See also Virtual Training Simulation, which is another kind of Training Room, but not precisely for fighting.