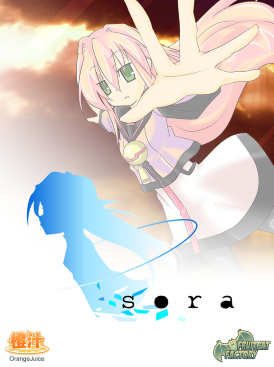 The last war on the worn-out planet.
Whether it is won or lost, there will be nothing left.
Sora does not know the meaning of her fight.
—sora's opening sequence
Advertisement:

sora is a horizontally-scrolling bullet hell shoot 'em up by Orange_Juice, which was released in 2010 for Windows PC during Comiket 78. It is the prequel to SUGURI, which was initially teased at the end of Acceleration of SUGURI's Arcade Mode if players managed to encounter Sora as a secret boss. The game's story takes place many years prior to the events of its predecessor where Sora, a girl gifted with the combat capabilities beyond anything the world has ever seen, was born in the middle of an ongoing war between two unknown armies that has brought death and destruction throughout the world. Against her own will, Sora drafted to fight for one side of the war, when all she wants is the Earth and once-beautiful skies to return their former glory. Like Suguri before her, Sora can amass a large arsenal of weapons at her disposal, ranging from beam rifles, a bazooka, a beam sword, and even a pile bunker thrown in for good measure. The game maintains its trademark dashing and lock-on shooting gameplay from its predecessor with some fundamental changes, such Sora being able use to three weapons instead of two (generally an energy-based weapon, a ballistics weapon, and a melee weapon), revises the combo-based scoring system, and incentivises dashing through or "catching" enemy fire by dashing as Sora can recover some lost vitality while building energy for her Hyper Attacks.

The game unfortunately received a terribly-made English localization on June 1st, 2012 by ΩTH who turned out to be an Internet troll by the name of FalcomGameFan. It involves use of such terms as "reploids" when the characters are actually referred to as "altered humans", a few name changes that threw its Theme Naming off, poorly-implemented SecuROM DRM that botched the game from being playable after purchase, swapped music that didn't belong in the game, bugs and glitches that were never present in the original version of the game, and above all else, a terrible translation of the game filled with out-of-place pop-culture references. Not only that, but the company even copyright flagging videos of the game on YouTube showcasing the dubious quality of the localization. Fans of the previous SUGURI series localized by Rockin' Android weren't happy about this, thus leading to an online petition

being formed to get the game professionally localized by someone else. Although the petition didn't get the signatures it needed, near the end of 2015, Fruitbat Factory obtained publishing rights to sora and eventually released it through Steam and directly from their website in 2016 with a proper localization and higher resolution visuals. The game's soundtracks, Sora no Kakera and Celeste -SORA EXTRA SOUNDTRACK-, were also released digitally from Fruitbat Factory.

As with SUGURI before it, sora was followed up with a shoot 'em up-fighting game hybrid with Acceleration of SUGURI 2 released during Comiket 80 in 2011. The game features both the heroines and boss characters of their respective games as playable characters, a Story Mode, an Arcade Mode, a local and online Versus Mode. During it's initial release however, lacked certain key features originally planned for the game and suffered from character balance issues, but thankfully these were through patches. Acceleration of SUGURI 2 was also localized by Fruitbat Factory in 2018, with similar quality-of-life improvements that sora received, an online lobby system through Steamworks, and rebalanced gameplay. Sora and some of the boss characters from her game also make an appearance in 100% Orange Juice! along with characters from SUGURI, QP Shooting, Flying Red Barrel, and other games by Orange_Juice. She also makes an unofficial cameo appearance in Daisessen's Lethal Crisis: ProtoSphere.

, and Acceleration of SUGURI 2's Japanese website can be viewed here