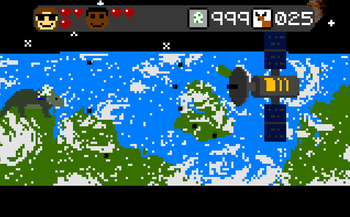 Super Amazing Wagon Adventure is a retro-styled 2D shooter by Sparsevector released in 2012. Parodying The Oregon Trail, right down to the retro graphics, the game has you controlling a wagon carrying a party of three migrants traveling west while Everything Is Trying To Kill Them.

The main appeal of the game is its highly randomized nature and its comically absurd amount of anachronisms and fantasy elements. Besides having to deal with mundane things like disease, wild animals and fording rivers, you can also find yourself battling machine gun wielding bandits, Bigfoot, rogue satellites, and so on. All this with Nintendo Hard difficulty but with lots of Have a Nice Death to lighten the mood. The game later received an update which adds "Turbo" to the title screen, adding even more zany scenarios and wagons to unlock.

The game was previously made available on DESURA and Xbox LIVE Indie Games until the discontinuation of both services. It is currently available on Steam.